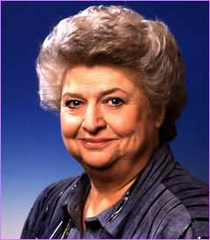 Nurse, journalist, broadcaster, novelist and 'agony aunt'. Born Claire Berenice Chetwynd in London. Her early life was marred by the cruelty of her parents who put her in a psychiatric hospital when they emigrated to Canada. She returned to the UK in 1951 and trained as a nurse. After the birth of her first child she took up writing as a career and graduated to giving advice in women's and girls' magazines and eventually television. She also had a prolific output of fiction and non-fiction. When she knew she was dying, she was reported as saying "Tell David Cameron that if he screws up my beloved NHS I'll come back and bloody haunt him!"

This section lists the memorials where the subject on this page is commemorated:
Claire Rayner

Editor of 'London Society', ‘an illustrated magazine of light and amusing lit...