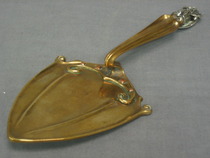 Searching for a picture we found the ceremonial trowel he used to affix a plaque which we will soon be publishing. The auction catalogue description is "An Art Nouveau gilt metal ceremonial trowel, the reverse engraved: I was vsed by Sir Horace B Marshall to fix a memorial colvmn of the Leysian Mission City Road EC April 22 1903." So we've decided to use that rather than a picture of another middle-aged white man in a suit.

This section lists the memorials where the subject on this page is commemorated:
Sir Horace B. Marshall (Junior)

This section lists the memorials created by the subject on this page:
Sir Horace B. Marshall (Junior)

The bookseller and author who, in 1763, introduced Dr Samuel Johnson to James...