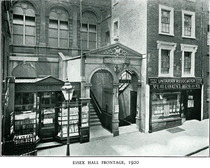 By the 1880s another Unitarian congregation had grown in Kensington but without a chapel. Also two Unitarian bodies required better offices: the British and Foreign Unitarian Association and The Sunday School Association. It was decided that the Essex Street congregation would join that in Kensington, in a new church (funded by Sir James Clarke Lawrence and his brother Edwin) and the old chapel would be redeveloped to become Essex Hall, the headquarters of British Unitarianism. With substantial funding from Frederick Nettlefold this was built in 1886, destroyed in WW2 but rebuilt and, 2012, is still the Headquarters of the General Assembly of Unitarian and Free Christian Churches.