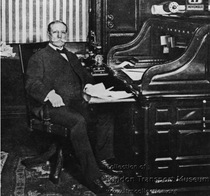 First things first - pronounce his name to rhyme to with turkeys. He has a claim to having created London Transport.

Born Philadelphia. The memorial describes him as 'creative' and 'imaginative' but he seems quite an unpleasant businessman - on-line biographies use words such as 'ruthless' and 'disreputable'.

Began his business career in grain brokerage, then moved into banking. The 1871 Great Chicago Fire brought him financial ruin and accusations of embezzlement or larceny, an attempt at bribery and 7 months in prison. But within 10 years he was wealthy again. In 1881 he divorced, married a new wife and moved to Chicago where he gradually bought up most of the transit companies. In 1899 he effectively cashed in his holdings and moved to New York.

1898 he was in London buying up the District Railway and financing its electrification. He formed the Metropolitan District Electric Traction Company and through this he pushed through the acquisition, construction and electrification of many of the tube lines that became those we know and love today, including the Charing Cross Euston & Hampstead Railway company, the Baker Street and Waterloo Railway, and the Brompton and Piccadilly tube. He also acquired the tramway system and electrified it.

Died New York, with his estate greatly reduced by many debts.

This section lists the memorials where the subject on this page is commemorated:
Charles Tyson Yerkes

{On the panel below the portrait:} Northern line founder Charles Tyson Yerkes...

Sailor. Born Harwich, Essex (His birth year is approximate). He moved to Roth...

Invented and patented by Joseph Hansom. This horse-drawn carriage, or cabriol...

A transport system from London to Portsmouth was needed, either a canal or a ...

A high-speed railway link from London through Kent to the UK end of the Chann...