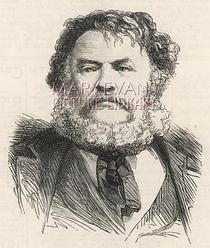 Cafe owner and ice-dealer. Born Switzerland. Arrived in England in July 1847. Built up a French-style cafe business. In the 1850s he became the first seller of ice-cream to the masses. He had owned ice wells off the Regent's Canal for a few years and in 1857 he formed a company to import ice from Norway and store it at an ice well in New Wharf Road, King's Cross. He built up a fleet of 60 ice wagons and was extremely successful. He had 5 daughters but his only son died aged 9. From about 1871 he spent most of his time back in Switzerland where he died. Ian Visits gives a good explanation of how the ice trade worked.

As well as the ice business Carlo and his family also built up a chain of restaurants and places of entertainment, many in central London. He assisted other Italians to come to London, many of whom either worked for him or set up Italian restaurants of their own.

This section lists the memorials where the subject on this page is commemorated:
Carlo Gatti

Victorian London has a wonderful contemporary description of the ice pit. In...