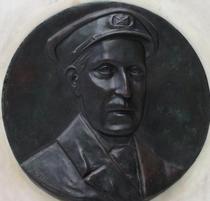 Master mariner.  Born Southampton.  From Hellfire Corner : Captain of the Great Eastern Railway Company's steamer Brussels, he in utter defiance of the Germans continued to work the Rotterdam-British East Coast route after war was declared. On two occasions in March 1915, though, The Brussels was attacked by U-Boats. The second attempt to sink the vessel seeing Captain Fryatt steer his ship towards the surfaced and torpedo-aiming-submarine forcing it to dive. 'You could have easily hung your hat on the periscope as she lay along side us', he later recalled. But on 23rd June 1916 a German patrol stopped The Brussels and its twice honoured (once by the GERC, once by the Admiralty) Master was taken first to Zeebrugge then on to Brugge where he was tried on 27th July for attempting to ram the U-Boat over a year previous. Although strongly denied by Captain Fryatt and the British Government - 'he was simply trying to avoid an attack and was only interested in saving the lives of his passengers and crew '- he was non-the-less found guilty and subsequently executed.

2022: The Brussels Times: "You have to search to find the little memorial park in Bruges next to the law courts. A gate leads into a secret spot once known as the Jardin de l’Aurore. A line of identical pillars commemorates 13 civilians executed in this park by the German army during World War One. The bullet holes have been left in the brick wall as a permanent memorial to the victims. Twelve of the civilians were locals. But one was a British man." Fryatt.

This section lists the memorials where the subject on this page is commemorated:
Captain Charles Algernon Fryatt

In the 19th century there was an extensive general market for butchers' meat ...

Merchant and merchant banker. Born at Larkbear, Exeter. He founded the bank t...