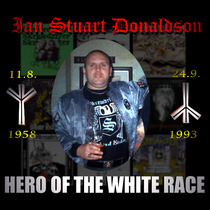 Musician, leading skinhead, far right-wing fund-raiser. Born Ian Stuart Donaldson in Lancashire. Singer of white power rock band Skrewdriver and co-founder of Blood and Honour, a very successful neo-Nazi music network used to raise funds for far-right movements.  1985 he was sentenced to 12 months in prison for attacking black youths in King's Cross station. In the early 1990s he was often attacked by militant anti-fascists in King's Cross where he was living. Died in a car crash in Derbyshire. Some suspect that the cause of the crash was not accidental. Since his death a cult following has developed.

This information comes from Channel 4.

This section lists the memorials where the subject on this page is commemorated:
Ian Stuart

We don't know what the red symbols mean (born and died?) but we do recognise ...

A year-long series of events organised by the Samuel Coleridge-Taylor Foundat...