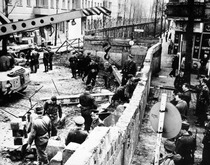 Erected by East Germany to isolate West Berlin (run by the US, the UK and France) from East Berlin and the rest of the surrounding East Germany (under control of the Soviet Union). It effectively imprisoned the inhabitants of East Berlin and was a symbol of the Cold War. In November 1989, for reasons too momentous to describe here, the political will to enforce the barrier failed and protesters were allowed to begin demolishing the wall.

Sections of the wall were distributed around the world and other pieces are in London at: the National Army Museum, Chelsea and at the sports hall of the German School, Richmond.

This section lists the memorials where the subject on this page is commemorated:
Berlin Wall

Frederick Woodward. Councillor, J.P. and Mayor of Ealing in 1937.