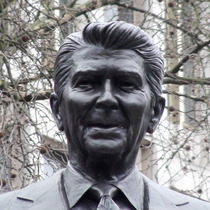 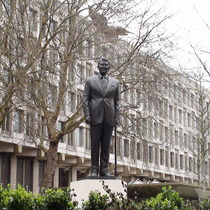 {A large plaque in front of the statue:}

"No arsenal or no weapon in the arsenals of the world is so formidable as the will and moral courage of free men and women."
Ronald Reagan, President of the United States, 1981-1989.
First Inaugural Address, Washington D.C., January 1981.

RONALD REAGAN, the 40th President of the United States of America, was a principled fighter for freedom. With a clear vision and will, he gave hope to the oppressed and shamed the oppressors.  His contribution to the world history in the 20th century culminated in his determined intervention to end the Cold War. President Reagan has left a lasting legacy as a campaigner for global peace.

"With the lever of American patriotism, he lifted up the world. And so today, in Prague, in Budapest, in Warsaw and Sofia, in Bucharest, in Kiev and in Moscow itself, the world celebrates the life of the great liberator."
Margaret Thatcher, Prime Minister 1979-1990.

"With President Reagan, we travelled the road from confrontation to co-operation. I join in the tribute to this remarkable man and salute him."
Mikhail Gorbachev, General Secretary of the Communist Party of the Soviet Union 1985-1991 (President 1990-1991).

"I recall with deep gratitude the late President's unwavering commitment … to the cause of freedom as well as his abiding faith in the human and spiritual values which ensure a future of solidarity, justice and peace in our world."
Pope John Paul II, Pontificate 1978-2005.

"We owe him our liberty. This can't be said often enough by people who lived under oppression for half a century, until communism fell in 1989."
Lech Walensa, President of Poland 1990-1995.

{A section of concrete (with no graffiti) artfully held in with sculpted bronze barbed wire, with a small inserted plaque:}
Fragment of the BERLIN WALL taken from the East side.

{The main plaque continues:}
The Berlin Wall symbolised the Cold war in its division of East and West.

The City had been divided by Soviet troops on 13th August 1961, when overnight a barricade of barbed wire coils and concrete posts was built along the 28.5 mile border between the Federal Republic of Germany and the German Democratic Republic. It was later replaced by a concrete wall with watchtower patrols. Berlin was a western enclave in the middle of the Soviet controlled East Germany, and considered crucially important to N.A.T.O.

The building of the wall was authorised by the First Secretary of the Central Committee of the Soviet Communist Party, Nikita Khrushchev, following political tension between him and U.S. president John F. Kennedy. The instability of the Cold War had created vast migration from the G.D.R. The wall created human tragedy for Berliners, but war was avoided and West Berlin had been saved.

The Berlin Wall remained in place for 28 years and was finally demolished on 9th November 1989, thereby peacefully uniting Germany and liberating Eastern Europe. The reunification of Germany and Berlin took place on 3rd October 1990.

In 1989 President Reagan was honoured by Her Majesty the Queen with the Knight Grand Cross of the Order of the Bath.

Don't know about you but we find this type of inscription very tedious, and suspect a committee, probably more than one, has had a hand in it. Some of the references and quotes seem excessive: Gorbachev, the Pope, Lech Walensa, Nikita Khrushchev, Thatcher, Kennedy and the Queen. Obviously Reagan is a major node on "six degrees of Kevin Bacon", we don't need all this name-dropping.

Designed to mirror the nearby Eisenhower statue this 10-foot bronze statue is on a 5-sided plinth. Westminster Council waived its rules about waiting 10 years after the death of a subject before allowing commemoration. Unveiled on US Independence Day - Lady Thatcher was invited but was unable to attend because of her frail health. However Discovering London made it and took some photos.

2021: When the US Embassy moved to Nine Elms so that the Grosvenor Square building can be converted into flats, this statue was first neglected and then removed.  The Daily Express reports: "A spokesman for the Grosvenor Estate, which looks after the property of the family of the Duke of Westminster, said: 'The statue is currently the responsibility of Qatari Diar (developer of the ex-US Embassy). They have removed it as they are doing major public realm works. It is in storage and will be returned when they open up the area again post works. This is conditioned under their planning consent.'"  Seems there are people who would like it re-erected in Parliament Square. We've marked it as 'lost' for now.

This section lists the subjects commemorated on the memorial on this page:
President Reagan statue

This section lists the subjects who helped to create/erect the memorial on this page:
President Reagan statue

Registered as a charity in 2009, with objectives commensurate with the erecti...

Co-funder of the statue.

Louis B. and Mrs Susman