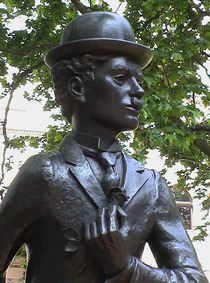 {Inscribed on the plinth:}
The comic genius who gave pleasure to so many.

Charlie Chaplin was born in Walworth, London into a music hall family. He joined a troupe of child dancers, 'Eight Lancashire Lads' at the age of 8. At 17, whilst on tour in America, he joined the Mack Sennett Keystone Company motion picture company.

His acting technique was characterised by a high degree of pathos, accentuated in the then silent movies, but he was unwilling later to adapt his style to the 'talkies'. His success enabled him to co-found United Artists in 1919.

The statue is by John Doubleday and was unveiled by Sir Ralph Richardson in April 1981.

December 2013: we came across this statue in a passageway. No plinth so looking forlorn and rather vulnerable amongst the bags of rubbish. It was beside the Prince Charles Cinema, very close to the Flora Robson foundation stone. We don't know if this relocation is temporary or permanent.

By March 2016 the statue had been damaged and taken away, for repair we hope. It really needs to be located somewhere more respectful and where it can be better looked after. We think a full size statue would be more appropriate, but presumably cost is the issue. April 2016: We're told Charlie is now back in Leicester Square.

This section lists the subjects commemorated on the memorial on this page:
Charlie Chaplin - statue

This section lists the subjects who helped to create/erect the memorial on this page:
Charlie Chaplin - statue