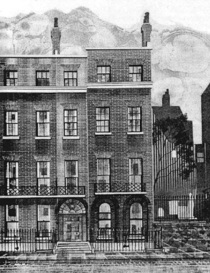 This 4-storey Georgian house was built by Charles Mayor under the supervision of James Burton in 1804. The only other notable former resident was John Thomas (1818-32), Governor of the Foundling Hospital (1818). Demolished in 1939 to make way for the School of Pharmacy.

The sketch is from 1938. Nos.39 & 40 (to the right) were demolished in 1936 to make way for the new Foundling Hospital building (now the museum). This image is rather puzzling - the front door at first seems to belong to the house on the left, but that would leave the house on the right, no 38, without a door, and no sign that it ever had one. This front door and the position of the chimney stacks suggest that no 38 occupied the right-most 3 bays, but this is contradicted by the clear vertical dividing line. Either we or the artist has got something wrong. Unless the demolition of numbers 39 and 40 included the right-most bay of number 38, including the front door. Is that possible?

Our factual information and the image come from a splendidly informative pdf issued by the Marchmont Association when the plaque was installed.

This section lists the memorials where the subject on this page is commemorated:
38 Brunswick Square

Founded in the 1880s by Angela Burdett-Coutts.

From their website: "We represent the interests of all those involved in prop...