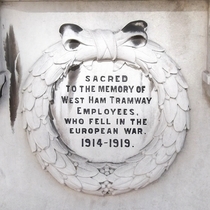 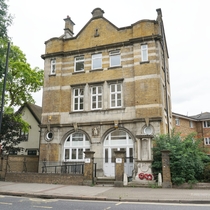 {On the central pillar:}
The heroic dead

{In a wreath on the plinth of the memorial:}
Sacred to the memory of West Ham Tramway employees who fell in the European war 1914 - 1919.

{On the front two short piers at the base of the memorial:}
J. F. Richards - designer
A. Elfes and Sons - sculptors

In our photo the foundation stone can be seen behind the railings, below the left-hand ground floor window.

This 1906 building was the Headquarters of West Ham Corporation tramways.  The tram and bus depot occupied the site immediately north of this building, now housing on Gad Close and Routemaster Close.

This section lists the subjects commemorated on the memorial on this page:
West Ham Tramway employees war memorial

This section lists the subjects who helped to create/erect the memorial on this page:
West Ham Tramway employees war memorial

A. Elfes and Sons

This section lists the other memorials at the same location as the memorial on this page:
West Ham Tramway employees war memorial