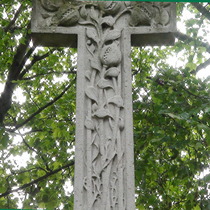 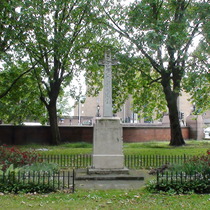 None of the text on the cross identifies who erected it but we think this garden is the old graveyard of St James Ratcliff, which used to stand where part of the 'Royal Foundation of St Katharine' now stands.  From London Metropolitan Archives: "Saint James' ... was consecrated in August 1833. The church was gutted by incendiary bombs on September 7th 1940. In 1951 the parish was united to Saint Paul's, Shadwell and the ruins taken down. The site was added to a public garden which had already been laid out in the old graveyard."