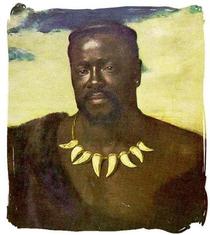 Ruler of the Zulu kingdom. Born Cetshwayo kaMpande at Mlambongwenya. His birth year is approximate. Succeeded as king on 1st September 1873. His refusal to disband his army as demanded by the British Commissioner for South Africa, Sir Bartle Frere, led to the Zulu war in 1879. Following the routing of his troops at Ulundi, he was exiled to Cape Town where he argued to be allowed to go to London, where he arrived in early August 1882.  He was a dignified diplomat, cheered by the crowds, shown the sights and was taken to the Isle of Wight to meet the Queen. At the end of August he returned to Zululand, restored as a puppet monarch to a reduced kingdom. This was short-lived as he was deposed within a week. He died shortly after, supposedly from a heart attack, but may have been poisoned.  Lots more info and pics here.

This section lists the memorials where the subject on this page is commemorated:
Cetshwayo

It was built when it was found that there were low stocks of artillery - but ...

Henry Percy Goodwin was the son of Warren Herbert Goodwin. His birth was regi...