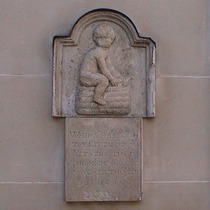 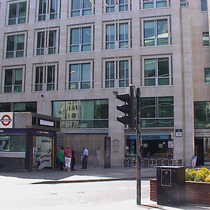 {Below the relief there is a separate stone, inscribed:}
When yu have sought the Citty Round
Yet still this is the highst ground
August the 27 1688
{Note that some of the letters have been inscribed above the text as if they had been left out by accident and added later: the "u" of "yu", the "t" of "sought", the "t" of "highst".}

This naked boy sitting on his pannier (basket) is thought to refer to the bakers in the area selling their wares on the street from a bread basket.

There seems to be general agreement that this is not the highest point in the City as claimed; that is a foot higher, in Cornhill. The mis-spellings and corrections in the text on the lower stone are rather quaint and initially made us suspicious of its authenticity. Our suspicions have been allayed partly by comparison with two other plaques of similar date: Guy, Earl of Warwick and St Olave, Silver Street - destroyed.

Spitalfields Life has an excellent post on old London signs, which includes early photos of the Warwick plaque and the Boy and Panyer.

Ian Visits gives the history of this plaque, at least from 1892.

The Vintners' Company, who own this relic, protected it from the bombs of WW2 by securing it in the vaults of the Central Criminal Court.

This section lists the subjects commemorated on the memorial on this page:
Boy and panyer