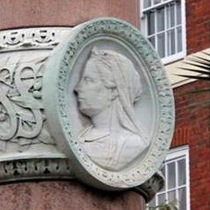 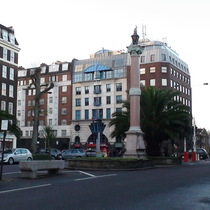 {On the north facing plinth, a bronze plaque:}
In memory of Her Most Gracious Majesty Queen Victoria, born in Kensington Palace, 24th May 1819, this column was erected by the inhabitants of the Royal Borough of Kensington, 1904.
Lewis H. Isaacs - Mayor
W. Chambers Leete - Town Clerk
H. L. Florence - architect

{On the ornate band (annulet) halfway up the pillar, behind the relief bust:}
Victoria Queen and Empress

Unveiled by Princess Louise, and her husband the Duke of Argyll in1904 in Kensington High Street, opposite St Mary Abbots Church, close to where the war memorial now is. The ever-interesting Library Time Machine has a photo (end of the page) of the column in this location. Moved to current location 1934.

One can see why Mr Leete preferred using his middle name in full rather than just the initial. Florence, who was in partnership with Isaacs, designed the work at no cost. Brindley sculpted the work and his firm, Farmer & Brindley, erected it.

There are not many memorials raised to Victoria in commemoration after her death. This is because there were plans for a national memorial (the statue outside Buckingham Palace) so local memorials were not encouraged. Many of the statues, busts, etc. for Queen Victoria were erected during her lifetime, often celebrating her jubilees. The 1903 statue in Croydon is probably another example of a local memorial to the recently late monarch.

The RBKC pdf gives: "The widening of the High Street in 1934 necessitated the removal of the column from its original site {and the trough from a different original site} to the northern end of Warwick Gardens. The space was originally intended to be the centre of a garden square until the plans were changed to give access to Pembroke Road."

What are all these palm trees doing at this corner? We counted four, including the massive one which is obscuring the column. It meant we had no chance of getting a photo of the relief bust on the north side, so we are grateful that someone managed it and put it on Pinterest.

This section lists the subjects commemorated on the memorial on this page:
Victoria's column

This section lists the subjects who helped to create/erect the memorial on this page:
Victoria's column

Architect, Born Henry Louis Florence. 1875 he is credited with Stourbridge &a...

This section lists the other memorials at the same location as the memorial on this page:
Victoria's column