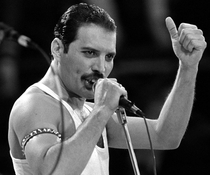 Singer and songwriter. Born Farrokh or Faroukh Bulsara in Government Hospital, Zanzibar, Tanzania. His family moved to Britain in 1964, settling in Feltham. After graduating from college, he tried several jobs before meeting Brian May and Roger Taylor and setting up the group Queen. He wrote many of their hits, including 'Bohemian Rhapsody' and 'We are the Champions'. Diagnosed with AIDS in 1987, he died at his home in Kensington.

Cremated at Kensal Green Cemetery, where there is a plaque, but it seems there is some uncertainty about the location of the ashes.

2014: Londonist led us to examine Logan Place W8 where Mercury had a house. The high wall around the gate labeled The Garden Lodge has been defaced by graffiti and stickers, all in commemoration of Mercury.

2016: Londonist reported on the whereabouts of the 20-foot statue of Mercury that stood outside the Dominion Theatre in Tottenham Court Road for over 12 years. When the We Will Rock You show closed in 2014 the statue was removed to Roger Taylor’s garden, in the Guildford area. And The Sun have photos of its arrival.

The origins of this statue seem to be that in 1996 a 10-foot bronze statue by Irena Sedlecka was erected in Montreaux, Switzerland, where Mercury had lived.

2020, 24 February: a street in Feltham was renamed Freddie Mercury Close. "Local authorities agreed to rename part of Hanworth Road — the address of the headquarters of the World Zoroastrian Organisation. Mercury was born a Zoroastrian and practised the ancient religion as a child." We checked Google Maps on the 25 and they already had it. Impressive.

This section lists the memorials where the subject on this page is commemorated:
Freddie Mercury

Plaque unveiled by Mercury's sister and Brian May. We thought it strange tha...

Musical composer. Born Dublin (in a street which is now named after him). W...