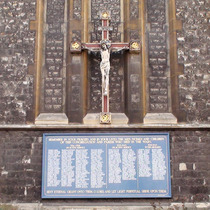 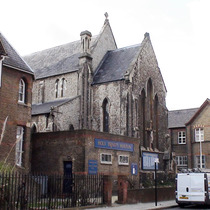 Remember in your prayers and in your lives, the men, women and children of this congregation and parish who died in the wars.

Rest eternal, grant unto them, O Lord, and let light perpetual shine upon them.
Restored 2008.

"Robert Burns" and "Alfred Oakley" each appear twice on the memorial. Since the lists are alphabetical these pairs can hardly be errors. They are all in the column for WW2 air raids so we imagine it's a father and son, or grandson, who share the name.

The 2 stone plaques are embedded in the low retaining wall of the flower bed at the foot of the large blue panel. The difference in wording between them is interesting.

This section lists the subjects commemorated on the memorial on this page:
Hoxton war memorial

Mabel Louise Newell was born on 5 September 1895, the fourth of the nine chil...

This section lists the other memorials at the same location as the memorial on this page:
Hoxton war memorial

To the honoured memory of the men of this church &amp; parish who fell in the...

To the honoured memory of the men, women &amp; children of this church &amp; ...