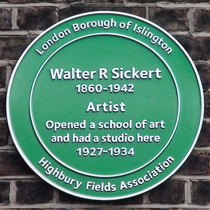 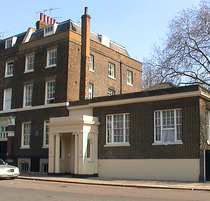 There has been a plaque on this building since at least 2000, commemorating Sickert’s occupancy.  It read: “Historic Building. W. R. Sickert, 1860 - 1942, had his school of painting & engraving here, 1927 - 34. London Borough of Islington”.  We don’t know why but on 30 July 2011 it was replaced with this plaque.  Dash and the Islington Tribune reported on its unveiling and have some info and comments on the Jack the Ripper theory.

Early in his career, while on a painting trip to Venice Sickert had a nasty incident with a scorpion in a WC. This may explain why, when he moved into this house he had all the conventional lavatory bowls removed and replaced with the continental style stand-up floor-pans.

This section lists the subjects commemorated on the memorial on this page:
Walter Sickert

This section lists the subjects who helped to create/erect the memorial on this page:
Walter Sickert

The Highbury Fields Association aims to encourage community participation in ...

Rutland Estate - hole in the wall

This boundary wall of the Rutland Estate was destroyed by a bomb, during Worl...