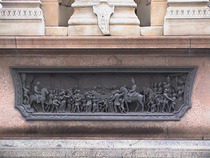 {On the north face, below the statue there is a bronze relief showing Victoria with the Prince and Princess of Wales in a carriage, with police holding back the crowds, going to a service at St Paul's to offer thanks for the Prince of Wales' recovery from typhoid.
Under the relief:}
Her most gracious majesty Queen Victoria and His Royal Highness Albert Edward Prince of Wales, going to St Paul's February 27th 1872.
{Signed:}
C.S. Kelsey & Son, Sculptors, 1880

This is a typically overwrought late Victorian edifice, topped with a giant griffin (or dragon; there are competing definitions of the differences) by Charles Birch. The north and south sides hold large statues of Queen Victoria and, the soon to be, Edward VII. To east and west are medallion portraits of the Lord Mayor at the time, Sir Francis Wyatt Truscott, and Prince Albert Victor, the King we never had.  At the bottom of the west face gilt lettering carved into the granite base announces "City of London".

Each side holds a bronze relief plaque, one of which states that the monument is aligned exactly with the west side the old Temple Bar and specifies the north-south displacement - a good example of Victorian flamboyance married to technical confidence.  A carved pillar is placed at each corner, decorated with symbols for arts, science, peace and war.  Arts includes two busts: to the north Homer and to the south Chaucer.

We have treated many of these features as separate memorials and give more details of each one on its own page.  Ornamental Passions has a very good post on this edifice.

This section lists the subjects commemorated on the memorial on this page:
Temple Bar memorial - Prince of Wales's typhoid recovery

This section lists the subjects who helped to create/erect the memorial on this page:
Temple Bar memorial - Prince of Wales's typhoid recovery

His father, James Kelsey, was also a sculptor.

This section lists the other memorials at the same location as the memorial on this page:
Temple Bar memorial - Prince of Wales's typhoid recovery

The four bas-relief panels by Edward Bainbridge Copnall depict the heads of G...