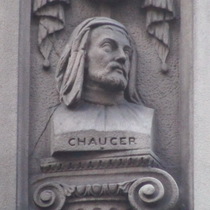 This section lists the subjects commemorated on the memorial on this page:
Temple Bar memorial - Chaucer

This section lists the other memorials at the same location as the memorial on this page:
Temple Bar memorial - Chaucer

We again thank David Hopkins for the Latin transcription (from some tortuous ...

We would not describe this face as ugly so it can't be Socrates. We reckon i...