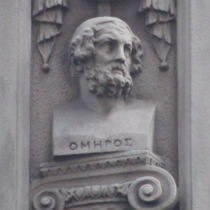 This section lists the subjects commemorated on the memorial on this page:
Temple Bar memorial - Homer

Ancient Greek poet. Wrote the Iliad and the Odyssey, which date from somewhe...

This section lists the other memorials at the same location as the memorial on this page:
Temple Bar memorial - Homer