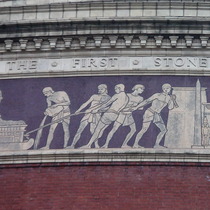 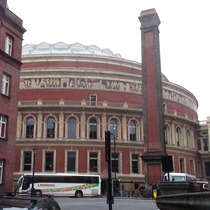 This Hall was erected for the advancement of the Arts & Sciences and works of industry of all nations in fulfilment of the intention of Albert Prince Consort. The site was purchased with the proceeds of the Great Exhibition of the year MDCCCLI {1851}. The first stone of the Hall was laid by Her Majesty Queen Victoria on the twentieth day of May MDCCCLXVII {1867} and it was opened by her Majesty the twenty ninth of March in the year MDCCCLXXI {1871}. Thine O Lord is the greatness and the power and the glory and the victory and the majesty for all that is in the heaven and in the earth is thine. The wise and their works are in the hand of God. Glory be to God on high and on Earth peace.

This ornate frieze, titled "The Triumph of Art and Letters", encircles the building.  It is 244 metres long, designed by members of the Royal Academy of Art and made in terracotta mosaic by students, "ladies of the South Kensington Museum mosaic class".  The 16 sections were shared out amongst the artists and represent lots of different creative trades, such as music, architecture, etc.   One section shows Britannia in the midst of some allegorical groups, such as Copia, with goods being offered to her from 4 named continents.  We can't explain why Australasia is missing.

Thankfully we did not have to walk around the Hall, craning our necks, to see all this lovely detail.  It is available to you at Life at the Hall via an elegant graphic that zooms in to show every piece of mosaic.

The biblical quotation comes from 1 Chronicles 29:11 and Ecclesiastes 9:1.

Francis Fowke designed this 1871 building but his designs were altered after his death. The Royal Albert Hall timeline has a 1910 photo with a caption that explains the chimney: it was built c. 1885, replacing another at a slightly different location.   “It sits above the main steam boilers and is still in use today.”

This section lists the subjects commemorated on the memorial on this page:
Royal Albert Hall frieze

This section lists the subjects who helped to create/erect the memorial on this page:
Royal Albert Hall frieze