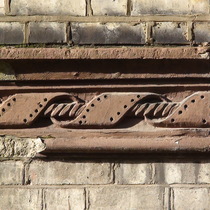 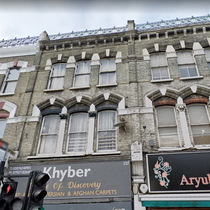 19th century houses are frequently decorated with terracotta decorations, often painted. These tend to repeat and recur and we assume they were chosen from a trade catalogue by the architect, or possibly the client. They normally depict plants, flowers, classical or abstract motifs, archetypal heads, etc. Researching Friese Greene Ed Fordham's website brought this extremely unusual decoration to our attention.

This decorative stringcourse is used on many of the buildings on two blocks of Kilburn High Road, just south of the Tricycle (Kiln) Theatre (the west side of the road, the two blocks from Willesden Lane up to Buckley Road, a total of about 15 houses). The best view is on the return in Burton Road where some of the moulding is at eye height. It seems to depict a roll of celluloid film (perforated with sprocket holes) around a screw-threaded bar.

We know that a sprocket system was used for punched cards and tape in 19th century industries such as weaving but the tape had holes punched in its body, not just at the edges. Film is the only media we can find that matches the tape in this image. However we are not aware that a screw thread bar plays any part in film recording or projection.

Searching for a reason for the use of this imagery on these buildings we wondered if it was connected to local cinemas. The area certainly had more than its fair share of cinemas, indeed West Hampstead Life recently 'discovered' one immediately opposite these buildings, The Biograph. However no cinemas existed before these houses. The UK first cinema show took place in 1896, and the first purpose-built cinema was erected in 1909.

In the target time period moving pictures were being invented; it's a complex history, but concentrating on the locality and the image we found two relevant facts.

At about the time these houses were erected Friese-Greene was living and working (1888-91) less than a mile away, at 136 Maida Vale, his move away probably prompted by his bankruptcy in 1891. We reject any suggestion of a pun on frieze/Friese but in 1889 he patented his camera which used perforated celluloid film.

From Film Site: In 1902 the US Court of Appeals "ruled that Edison did not invent the motion-picture camera, but allowed that he had invented the sprocket system that moved perforated film through the camera." Edison's company designed a camera in 1891 that used sprocketed film. That date is probably too late for this invention to have had any effect on the decoration of these buildings, and anyway, there is no connection with Kilburn.

We think it was remarkably prescient of the architect/builder of these houses to recognise the importance of the nascent film technology to the extent that this moulding suggests. Still a mystery.

{Crammed in above the hog:}Rebuilt by Wm Harris 1897{In a monogram lower down...

The four bas-relief panels by Edward Bainbridge Copnall depict the heads of G...