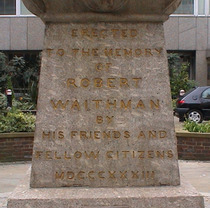 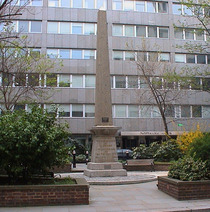 {Inscribed in gold on the stone:}
Erected to the memory of Robert Waithman by his friends and fellow citizens. MDCCCXXXIII. {1833}

Originally erected near Waithman's shop in Fleet Street at its junction with Farringdon Street, this obelisk was moved in 1951 to Bartholomew Close and then again, in 1972-5 to its present position.

The plaque to the Mayoralty is attached low down on the base of the obelisk.

This section lists the subjects commemorated on the memorial on this page:
Robert Waithman - obelisk

Born Wrexham. A self-made man, a linen-draper who rose to the highest positio...

This section lists the subjects who helped to create/erect the memorial on this page:
Robert Waithman - obelisk

This section lists the other memorials at the same location as the memorial on this page:
Robert Waithman - obelisk