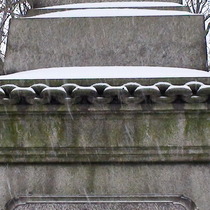 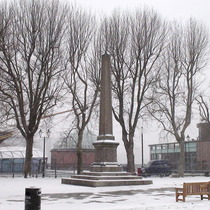 {South side, on the base of the obelisk, above the plinth:}
New Zealand

{South side, on the plaque on the plinth:}
This monument is erected by the surviving officers and men to the memory of their comrades who fell in action in New Zealand during the years 1863 - 1864.

{The other 3 sides each have a similar granite plaque inscribed with the names of the dead, in hierarchy order, we think. See Subjects commemorated for the list.}

Made of Cornish granite.  We've photoed the stone chain around the monument.  Lower down is a stone rope with knots at the corners.

We learn at Wikipedia that the New Zealand Wars lasted 1845 – 1872.  Called the Land Wars or the Maori Wars, during which the English fought with the native Maoris for control of the land.  Not a period to be proud of.   The Greenwich Memorial is specifically in memory of the 21 officers and men from the ships Curacoa (7), Eclipse (1), Esk (5), Harrier (6) and Miranda (2) who died in the New Zealand War 1863-4.

On the list three names, Greenham, Hayes and Young do not have a vessel specified.  We've assumed this is ditto from the line above.  The plaques are difficult to read but we got help from Maritime Memorials, which also has a bit more info about some of the names.

2017: We read that (23 July 2015) a wreath was laid here to commemorate the Battle of Gate Pā. Wikipedia explains: "British forces suffered a humiliating defeat in the Battle of Gate Pā on 29 April 1864, with 31 killed and 80 wounded despite vastly outnumbering their Māori foe, but saved face seven weeks later by routing their enemy at the Battle of Te Ranga...."

This section lists the subjects commemorated on the memorial on this page:
New Zealand obelisk