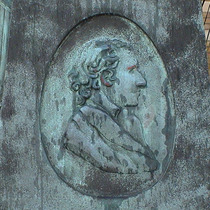 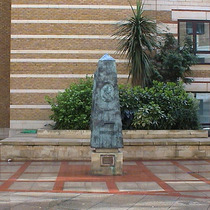 Thomas Paine
{Low down on the front, brass plaque in a wooden frame:}
This sculpture was unveiled by Sir William Barlow, Chairman of BICC, plc, on the 13th June 1991.
It was commissioned by BICC Developments Ltd and created by Kevin Jordan M.A. (R.C.A.) as a tribute to Thomas Paine, whose work 'Rights of Man' was written at the Angel and published in 1791.

These are the times that try men's' souls.

{north face:
a large fasces and:}
My country is my world and my religion is to do good.

{back, east face:
an axe around which twists a leaving branch which it appears to have just severed and:}
Lay then the axe to the root and teach governments humanity.

{south face:
a star and:}
It is necessary for the happiness of man that he is mentally faithful to himself.

Erected on the 200th anniversary of the publication of Paine's "Rights of Man", written while Paine lived at the Angel Inn which used to stand on the north west corner of the nearby Pentonville Road and Islington High Street junction.

This monument can be compared with Dance's Obelisk. Paine's obelisk is better explained than Dance's but the quality of its design and workmanship is much inferior.

This huge development, by Rock Townsend in 1991, is worth a look. It is decorated with the full gamut of post-modern tropes: tower, clock, sundial, rustication, decorative brickwork, pyramids, domes, etc.

The main tenant of these offices currently (2008) seems to be HM Customs and Excise.

2022: There are plans to redevelop Angel Square into a bland, generic office block.

This section lists the subjects commemorated on the memorial on this page:
Thomas Paine obelisk

This section lists the subjects who helped to create/erect the memorial on this page:
Thomas Paine obelisk