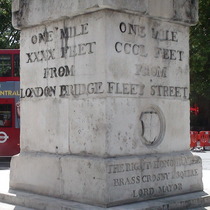 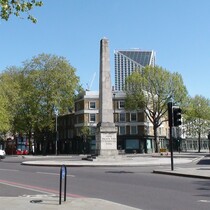 {On north face:}
One mile CCCL {350} feet from Fleet Street {above a shield with the cross of St George}
The Right Honourable Brass Crosby Esquire Lord Mayor

{On west face:}
One mile from Palace Yard Westminster Hall

{On south face:}
Erected in XIth year of the reign of King George the Third, MDCCLXXI {1771}

{On east face:}
One mile XXXX {40} feet from London Bridge

Diamond Geezer has a very good post on this piece of street furniture but, surprisingly, he does not comment on the accuracy of the measurements, so we decided to give free rein to our inner nerd.

The three measurements on the monument are, to one decimal place: 1.1m, 1.0m and 1.0m. We were pleased to see that Google Maps gives the same measurements. This exercise prompted us to wonder why these 3 destinations were chosen instead of any other, such as Charing Cross, often taken as the centre of London.

Spotting that the 3 measurements are practically identical we wonder if the process when the inscription was being planned was first to decide on the measurement of 1 mile, then draw a circle with a 1 mile radius centred on the Circus and see what notable locations lie on, or close to, the line, and also have a reasonably direct road route.

Re-enacting this in the 21st century we have to remember which bridges were available in 1771: only London, Blackfriars and Westminster. So, now, we could choose (old) Somerset House (1m) but in 1771, without Waterloo Bridge, it was not an option, and without Hungerford Bridge Charing Cross was much more than 1m.

Westminster Bridge was opened in 1750; Blackfriars Bridge in 1769 and this meant this area of fields was ripe for development. Part of Robert Mylne's work was the construction of St George's Circus and Blackfriars Road to connect his Circus to his new bridge. He also designed the obelisk, proudly specifying how close this site is to significant London locations - important if the area is to become popular and make money for the developers: location, location, location.

A number of websites (possibly all originating from Wikipedia) give different dates for the following events but we have taken the Listing text as the most likely to be correct. In about 1897 the obelisk was removed to make way for a clock tower celebrating Queen Victoria's Diamond Jubilee. Getty have a photo of the tower from the 1930's showing the surrounding buildings which they suggest were largely destroyed in the WW2 Blitz.

The tower was itself demolished in the late 1930s to free up traffic movements. Meanwhile the obelisk had been biding its time in nearby Geraldine Mary Harmsworth Park and in 1998 it took up residence again at St George's Circus. Sadly we cannot find a picture of the obelisk during its sojourn in the Park.

In 1899 the crypt of nearby St George the Martyr (at Borough tube station) was cleared and almost 1,500 coffins were moved from there to Brookwood Cemetery (as were graves from a number of other overcrowded London churches). A copy of this obelisk was used to mark the location of the St George re-burials. Wikipedia has a photo of what's left if it.

Diamond Geezer is essential reading for those who wish to know more about this area.

This section lists the subjects commemorated on the memorial on this page:
St George's Circus - obelisk

This section lists the subjects who helped to create/erect the memorial on this page:
St George's Circus - obelisk

This section lists the other memorials at the same location as the memorial on this page:
St George's Circus - obelisk