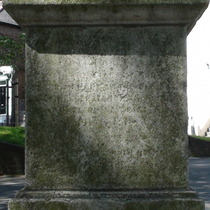 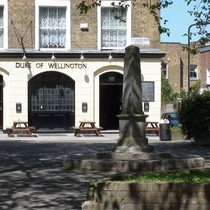 {The inscription reportedly read:}
Erected by the Old Boys’ Club. To the Glory of God and in memory of the old boys of Haggerston-road School who fell in the Great War, 1914-1918. ‘Greater Love hath no man than this’

{Condition 2012: On the south face: at the top there are signs of something round having been removed, and on the lower section, pictured, there are traces of the, now illegible, inscription.}

The inscription text comes from IWM: The inscription is no longer visible - according to newspaper report of unveiling in 1921 it read: "Erected by the Old Boys’ Club. To the Glory of God and in memory of the old boys of Haggerston-road School who fell in the Great War, 1914-1918. ‘Greater Love hath no man than this’ .... Hackney and Kingsland Gazette 23 February 1921."

That's all we could find on the web about this monument, though apparently Iain Sinclair's 'Lights Out For The Territory' mentions it.

This section lists the subjects commemorated on the memorial on this page:
WW1 obelisk - E8