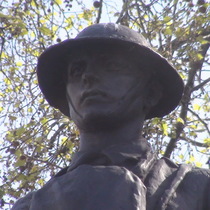 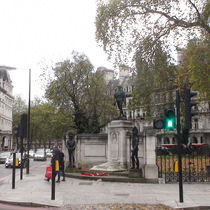 {Below the insignia:}
In memory of 11,575 officers, warrant officers, non-commissioned officers and riflemen of the Rifle Brigade who fell in the Great War, 1914 - 1918.

{On a large stone laid into the ground in front:}
And in memory of 1,329 officers, warrant officers, non-commissioned officers and riflemen of the corps of the Rifle Brigade who fell in the World War, 1939 - 1945.

There are 3 statues on this memorial: to the left - a rifleman of 1806; to the right - an officer of 1800 (when the brigade was formed); on top of the central plinth - a rifleman of WW1. The Victorian Web has more photos. Two visits and we're still having trouble getting a good picture of the WW1 soldier's face - this is the best we can do.

In 2014 we were contacted by Maria A Hessman in the USA, telling us that her grandfather, E. A. Dudley, modelled for this WW1 soldier and she sent us some information about him which we’ve put on his page.

We already have three soldier-models on London: Edward Ryder, Jack Askham and John Webber so we're delighted to add a fourth.

2021: We have been contacted by Steve Parlanti, who writes: "My great grandfather, E. J. Parlanti, cast the bronze soldiers, and I managed to find his signature on one of the soldiers. Unfortunately, I didn't photograph the signature, and now illness prevents me from returning back to do so. I wonder if, during the course of your ongoing project, you might be able at some stage to be able to photograph the signature (or indeed signatures if all 3 are marked)? Very many thanks." It may be some time before we find ourselves in the area so we thought we'd put this request out there.  If you manage to take these photos please forward them to us so we can put you in touch with Steve.

This section lists the subjects commemorated on the memorial on this page:
Rifle Brigade

Formed initially as the 'Experimental Corps of Riflemen' it became the 'Rifle...

Members of the Rifle Brigade lost in WW1

Members of the Rifle Brigade lost in WW2

This section lists the subjects who helped to create/erect the memorial on this page:
Rifle Brigade

We are grateful to Maria A Hessman in the USA, for telling us that her grandf...

Sculptor. Born Glasgow. Good friend and associate of Rodin. Also by Tweed is ...