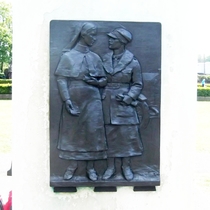 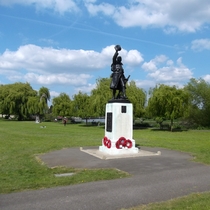 {On the plinth beneath the Twickenham coat of arms with the motto 'Looking Backward Looking Forward':}
1914 - 1918
To the glorious memory of the men of Twickenham who fell in the great war
Their name liveth for evermore.
And to those who gave their lives in the war of 1939 - 1945.

The other three faces of the plinth feature reliefs of airmen, sailors and unusually, as shown in our photograph, members of the women's voluntary services. (All the panels can be seen on this website).

This memorial was positioned here to mark the end of a vista from the north-east where the Star and Garter Home for disabled soldiers and sailors stands on the crest of Richmond Hill.

The bronze plaque showing the naval scene was stolen by metal thieves in 2011 but was replaced in 2012.

This section lists the subjects commemorated on the memorial on this page:
Twickenham war memorial

Men of Twickenham who died in WW1 & WW2

This section lists the subjects who helped to create/erect the memorial on this page:
Twickenham war memorial

The carving on the south face has a peculiarity which we think must be an err...

The face on the right (south-facing) has been badly weather-beaten and then i...