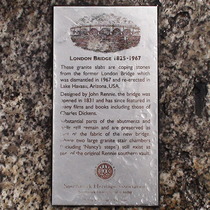 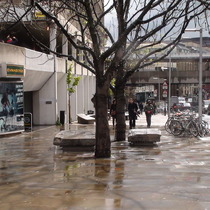 {Below an etching of the Rennie bridge:}
London bridge 1825 - 1967
These granite slabs are coping stones from the former London Bridge which was dismantled in 1967 and re-erected in Lake Havasu, Arizona, USA. Designed by John Rennie, the bridge was opened in 1831 and has since featured in many films and books including those of Charles Dickens.
Substantial parts of the abutments and walls still remain and are preserved as part of the fabric of the new bridge, where two large granite stair chambers (including 'Nancy's steps') still exist as part of the original Rennie southern vault.

These two piece of granite were discovered when the foundations for the Southwark Needle were being dug so they were erected as seats as part of the Southwark Gateway project.  The plaque is attached to the horizontal surface of one of them and was photographed in Summer 2012; hence the rain drops.

This section lists the subjects commemorated on the memorial on this page:
London Bridge - Duke Street Hill

This section lists the subjects who helped to create/erect the memorial on this page:
London Bridge - Duke Street Hill

See "2018" below for the event that this relief depicts. Camden's Public Art...

The painted plaster rose and crown are rather lovely but the numbers, especia...