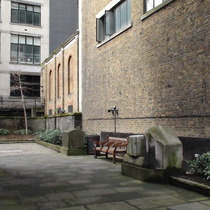 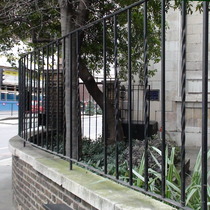 These large chunks of old masonry are in the small courtyard to the west of the church tower.   They were discovered in 1921 across the road from the church and are considered to be remains of the old London Bridge. Some screw-holes attest to the existence at one time of a plaque which may have confirmed this, and specified which version of the bridge. And, to be honest, we don't even know which of these stones are from the bridge; we've read "two" but there are four here.

The main route to the Old London Bridge used to be down Fish Street Hill and past this church.  As the bridge became busier it was found necessary to cut an archway through the tower of the church to ease access for pedestrians. Historic UK have a good picture of the site in use. Eventually the bridge was rebuilt a little up-stream (to the west) so, in 1831, the church gained some of the old, disused roadway, and some much-deserved peace.

This section lists the subjects commemorated on the memorial on this page:
London Bridge stones at St Magnus the Martyr

This section lists the other memorials at the same location as the memorial on this page:
London Bridge stones at St Magnus the Martyr