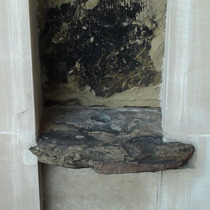 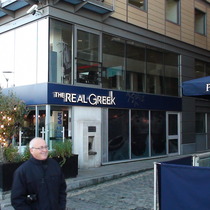 {On the modern plaque above:}
The Ferryman's seat located on previous buildings at this site was constructed for the convenience of Bankside watermen who operated ferrying services across the river. The seat's age is unknown but it is thought to have ancient origins.
Historic Southwark

From the middle ages on, the south bank, lying outside the area regulated by the City, tended to be the place of recreation: theatres, brothels and bear-baiting (as you do). The City became even stricter in 1572 when theatres and players were banned entirely from the City - well illustrated in this map of Elizabethan theatres.  To reach these southern pleasures the residents of London, mostly living to the north, had to be ferried across the river.  Hence the need for watermen, or wherrymen, and seats where they could rest while their fares partook of the entertainments.  The seats must have started gathering dust in 1642 when the Puritans closed all theatres.  And brothels and bear-baiting pits as well, we imagine.

This section lists the subjects commemorated on the memorial on this page:
wherrymen seat

From the earliest days until the mid-18th century the Thames was the preferre...

This section lists the subjects who helped to create/erect the memorial on this page:
wherrymen seat

This pulpit is erected in memory of the Revd. William Cadman MA, canon of Can...

Our researches have turned up just one clue, which may mean nothing: in John ...