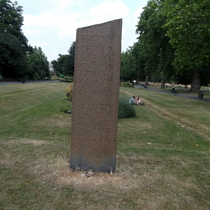 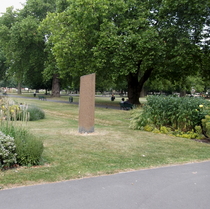 History despite its wrenching pain cannot be unlived but if faced with courage need not be lived again.
Maya Angelou.

{Surrounded by:}
To commemorate the wartime suffering of the people of Kennington in particular over 50 men women and children who were killed on 15th October 1940 when a bomb destroyed an air raid shelter near this spot. Rest in peace.

{On the back, near the ground:}
Erected by the Friends of Kennington Park

The Friends say "The air raid shelters were actually on the south field of the park, not under the sunken garden, and, indeed, in Google Earth view you can see the grid of the trenches. See Kennington's Forgotten Tragedy for more information and a list of names of the victims.

A nearby information board provides some general information about the Park:
Kennington Park was opened to the public in 1854, and was the first open space in Lambeth to be dedicated for public use and enjoyment.  Prior to that the site was known as ‘Kennington Common’ and belonged to the Manor of Kennington, which was part of the Duchy of Cornwall.  Kennington Common is famous for being the place where over 25,000 supporters of the Chartist Movement assembled on 10th April 1848 to press their demands for a ‘National Charter’ of rights for the working classes.

This section lists the subjects commemorated on the memorial on this page:
Kennington Park air-raid

The wartime suffering of the people of Kennington in particular over 50 men w...

This section lists the subjects who helped to create/erect the memorial on this page:
Kennington Park air-raid

{Inscribed wooden block, attached to the base below the cross:}Pray for the s...