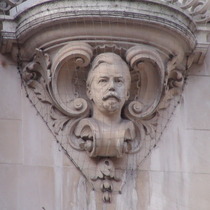 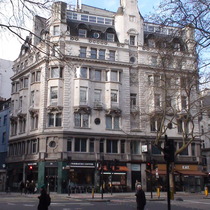 The architect for this 1906 building was Arthur Sykes (1862 - 1940) who also built this Oxford Street/Stratford Place corner block, See Palmers Green for more on Sykes.

Kingsway was part of a major redevelopment of the area which removed many of the historic little streets which had gone downhill and were designated as slums. Plans were published by London County Council in 1898 and the road was formally opened in 1905.

We are very grateful to Peter Berthoud of Discovering London - without his help we would still have no idea who this man was. This block was built as the London head office for his successful Liverpool-based chain of department stores.

This section lists the subjects commemorated on the memorial on this page:
Owen Owen

Founder of a chain of department stores. Born Wales to a farming family. 186...

Above the central window, this cameo-type profile bust of the King is draped ...