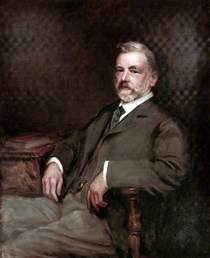 Founder of a chain of department stores.

Born Wales to a farming family. 1860 apprenticed to an uncle at a drapers shop in Bath. 1868 opened his own drapers in Liverpool. Very successful and by 1873 had 120 staff, who he treated unusually well, for the time. 1891 married and came to London but continued to manage the Liverpool store which became one of the largest stores in the north of England. He invested widely, in other stores, railways, etc. He supported many Welsh organisations. Died in London.

The business expanded and by 1979 operated more than 20 department stores. The company effectively remained under family control until 1985 but folded in 2007.

The painting, by Hubert von Herkomer, shows Owen in 1868.

This section lists the memorials where the subject on this page is commemorated:
Owen Owen

From British History: "Burnt in the {1666 Great} Fire and rebuilt. Rebuilt ab...

The production of jam was actually a minor function of this factory, as it pr...