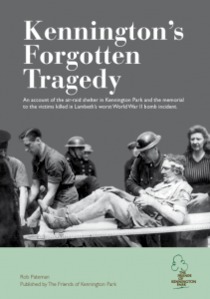 Following the outbreak of World War II, there was a variety of designs for shelters designed to protect the populace from air-raids. For those who didn't have Anderson or Morrison shelters or access to London Underground stations, an alternative was the 'Trench' shelters in public parks. These were very basic and were designed for people who were caught out when an air-raid occurred; but concerns were expressed about the safety of their design. At about 8pm one day the shelter in Kennington Park suffered a direct hit, resulting in the collapse of the trenches which smothered the occupants. As no records were kept of those entering shelters it is difficult to know how many died in the raid. Best estimates give the number killed as 104, of which only 48 bodies were recovered, men women and babies.

This section lists the memorials where the subject on this page is commemorated:
Kennington Park air-raid