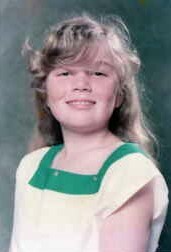 She died, aged 15 years, as a result of an IRA bomb explosion at the Baltic Exchange, St Mary Axe, London, on 10 April 1992. She came from Laindon, Essex, and had accompanied her father, Danny Carter, to the area as he returned a car he had been using for business.  He had just driven the car into the basement car park of the Commercial Union building when the bomb exploded. His daughter was waiting in a parked car on the street above.

She was buried on 22 April 1992 in Basildon, Essex.  Nobody has been convicted of her murder.

June 2017: From Basildon Echo: "Robert, Danielle and their other brother Nicky all played hockey and their parents were coaches, so it was a family sport." "Her brother, Robert, 37, of Pitsea, decided to bring back the Danielle Carter Memorial Tournament for the first time in three years to mark the occasion."

This section lists the memorials where the subject on this page is commemorated:
Danielle Carter

Since 9/11 is a UK educational charity which was set up on the tenth annivers...