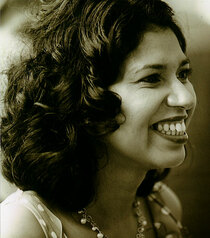 Sarah Bibi Ali was born on 28 February 1966. Her birth was registered in Lambeth and her mother's maiden name was Khatocn. Her father was an employee in British government service and the family lived in Balham.

She was working in Sydney, Australia for Reuters as an equity marketing manager when she met American architect Rogelio R. Escarcega. During Christmas 2000 he proposed marriage to her at Tower Bridge and they were married in April 2001 in Wandsworth.

They lived in Manhattan, New York and she obtained work as a freelance marketing consultant at the Risk Waters Group in August 2001.

This section lists the memorials where the subject on this page is commemorated:
Sarah Ali Escarcega

We guess the date on the plaque is her date of death and that she may have be...