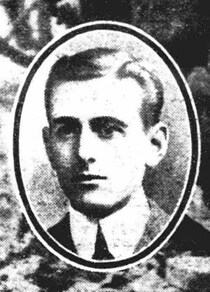 Employed at the Silvertown Brunner Mond works and killed in the 1917 Silvertown explosion. The Imperial War Museum has a page with many entries. There is also a page for his wife.

In 1904 he married Mary Letitia (1878 - 1970) and they had two children. In 1916 she was Lady Superintendent at the Brunner Mond Chemical Works, but presumably was not at work on that fateful evening. She died at Battle, Sussex in 1970.

Angel went to Christ Church Oxford and they have a full page on him. "Andrea volunteered for war work and was recruited near the beginning of the First World War by the Brunner Mond Company to oversee TNT processing. ... It is known that a number of men were fighting the fire when the TNT exploded, they included chief chemist and Oxford don, Andreas Angel, who was a war-work volunteer, he received a posthumous Edward Medal."

Another page at Imperial War Museum: "In an article from the Royal Society of Chemistry, Stephen McCarthy writes: "Angel was keen to join the Army, but the demand for chemistry skills in munitions manufacture meant that he was forbidden to enlist. Instead, he was given the job of managing a TNT processing factory in Silvertown, East London. This plant was owned by the Brunner Mond Company, and until 1912 had produced caustic soda. When soda production ceased, the factory lay dormant and was therefore available for war use. Despite the high population density around the factory site, the demand for explosives was so great that Brunner Mond was persuaded by the Government to re-open the factory as a TNT plant. The team of mostly women plant operatives were not skilled in chemistry, but Angel’s teaching experience at Oxford was of use and many of the workers became good chemists under his instruction. He was also able to maintain his research interests while at the factory, despite the considerable demands on his time and expertise."

Of the 16 names listed of the workforce killed in the explosion only one is a woman. It's difficult to reconcile this fact with the statement "The team of mostly women plant operatives."

This section lists the memorials where the subject on this page is commemorated:
Andrea Angel, Edward Medal