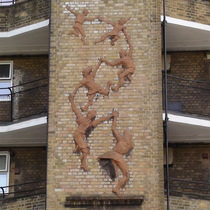 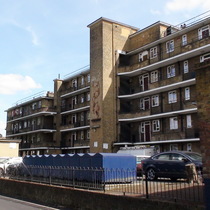 The full title 'Following the Leader (Memorial to the Children Killed in the Blitz)’ makes it clear that this relief is indeed a memorial. Two other nearby, similar Peri reliefs are not so named but we have collected them anyway for completeness. Everything below applies to all 3 sculptures.

Commissioned by the LCC, the sculptures together with the bricks around them are all Listed (Following, Footballers, Mother) but the rest of the buildings are not. The listings explain that in the 1930s Peri "pioneered the use of concrete as a medium for expressive sculptures and came to specialise in architectural reliefs in coloured concrete, developing ‘Pericrete’, a mixture of concrete with polyester resin and metallic powders." and that the "concrete {is} laid over an expanded metal mesh". Ornamental Passions has more to say about the technique.

We noticed that for all these sculptures the bricks in the wall behind are slightly differently-coloured, or cleaner, than those of the rest of the walls. The Listings explain: "According to the catalogue of a Peri exhibition at the Leicestershire Museum and Art Gallery in 1991, the composition was originally framed by dark coloured pointing to the brick to make it stand out from the rest of the surface but this has since been replaced with standard mortar."

All are described as being "mounted on the stair tower" but the towers look more like lift towers, added to the (probably) pre-war blocks after the war.

This section lists the subjects commemorated on the memorial on this page:
Following the Leader

This section lists the subjects who helped to create/erect the memorial on this page:
Following the Leader

Born in Hungary as Ladislas Weisz. Moved to Berlin in the 1920s and became, t...