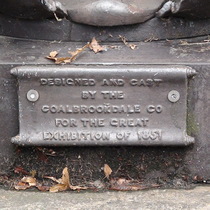 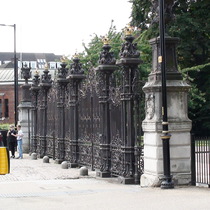 From Royal Parks: "The gates were designed by Charles Crookes. Each of the cast iron gates was cast in one piece. Their finials, supporting a crown, represent peace and the stags' head vases evoke the origins of the park.  The gates were damaged by a bomb in World War II."

We've passed these gates many times without ever noticing these plaques but in summer 2019, we stopped to examine the ironwork because we noticed it had been stripped of paint, presumably in preparation for a new paint job.

Each of the 6 metal uprights has, at foot level, two plaques, one facing east, the other facing west. We read those on the west side (those on the east are the same), north to south:

The original scroll plaques rather nicely take the form of a document roll and the later plaques for the restoration works in 1990 and 2000 have copied the shape.

Each metal upright is topped by a finial with four mer-children surmounted by a gilded crown. The two stone piers are topped with stag-head-adorned vases and at eye-level have monograms: RVR, but the first R is reversed in a Toys-R-Us way.

Royal Parks explain that these gates were moved here in 1871 to enhance the approach to the Albert Memorial. Wikipedia says that they were first moved to "the entrance to Lancaster Walk in 1852". Lancaster Walk is marked on Google Maps as the path from Lancaster Gate to the Albert Memorial, but in 1852 it probably continued to what is now Kensington Gore so perhaps the gates were at this junction. It seems unlikely that they have been moved twice.

We wanted to know where the gates were originally located and found it described as "the Queen's Entrance at one end of Crystal Palace" and also "the entrance to the Crystal Palace's north transept". The answer lies in a painting held by the Royal Collection Trust which apparently shows the gates in situ: "Entrance to the North Transept of the Great Exhibition Building, 1 May 1851; 'Waiting for the Queen' Signed and dated 1851" "This painting shows the transept of the building looking south on the morning of 1 May 1851, before the arrival of Queen Victoria. A Yeoman of the Guard stands on either side of the gates, made in Coalbrookdale, Shropshire, which now divide Hyde Park from Kensington Gardens. Through the gates can be seen a crystal fountain and the baldacchino (canopy) under which the royal party would stand." Sounds exactly what we need but, very annoyingly, the website does not show the painting.

Careful not to confuse these gates with another set which Coalbrookdale submitted as a exhibit to the 1851 show and ended up at the entrance to Warrington’s town hall.

This section lists the subjects commemorated on the memorial on this page:
Great Exhibition - Coalbrookdale Gates

This section lists the subjects who helped to create/erect the memorial on this page:
Great Exhibition - Coalbrookdale Gates

An iron foundry set up by Abraham Darby in Shropshire.

The church has two information boards, both of a standard design, which we wo...

{On one of the rings:} By wisdom a house is built and through understanding i...