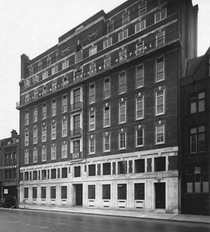 The Royal Westminster Infirmary for the Cure of Diseases of the Eye was founded by George James Guthrie (1785-1856). Clinics were initially held at Guthrie's house, 2 Berkeley Street. It moved first to what is now Glasshouse Street, then Warwick Street. c.1830 it was decided that this hospital and Charing Cross Hospital would construct new buildings on a shared site, where the plaques are now. The building was reconstructed in 1900, 1906 and 1912 (we assume these were refurbishments or extensions rather than complete rebuilds).

1926-8 moved to a new building in what is now High Holborn (our image). The next-door Charing Cross Hospital took over the vacated building.

In 1947 it merged with the Central London Ophthalmic Hospital in Judd Street and the Royal London Ophthalmic Hospital in Moorfields, becoming the Westminster Branch of the Moorfields, Westminster and Central Eye Hospital. The group joined the NHS in 1948 and the Westminster Branch closed in 1989. The High Holborn building was demolished and the site is now (2019) occupied by High Holborn Residence a 1995 student accommodation.

This section lists the memorials where the subject on this page is commemorated:
Royal Westminster Ophthalmic Hospital

Reformer and founder of "The Lancet" - begun in Oct 1823. Spoke in Parliament...