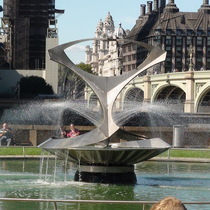 Named after Thomas a Becket, so possibly founded after 1173 when Becket was canonised. As part of an Augustinian monastery, St Thomas’ (at the London Bridge site) was closed during the Reformation. Re-opened during Edward VI’s reign. In 1862 the railways need the hospital land so St Thomas' moved, temporarily to Royal Surrey Gardens, Walworth and then moved into its new permanent site in Lambeth in 1871. Several extensions to the buildings have been added over the years.

Our photo shows the stainless steel Revolving Torsion Fountain by Naum Gabo, 1972, in St Thomas's Hospital Garden. The water jets form part of the sculpture as they meet and shatter apart. The title suggests that perhaps the whole structure was intended to revolve but some early footage shows it operating roughly as it does now. We also like the water spilling out from the lower basin but this only happens at the left side and it's not clear whether this should be happening at all.

This section lists the memorials where the subject on this page is commemorated:
St Thomas' Hospital

This 1682 statue by Cartwright was commissioned by Clayton and was originally...

On this site, poet &amp; apothecary John Keats, &amp; his friend, the poet, a...

Discovered the bacilli for anthrax, tuberculosis and cholera. A founder of b...