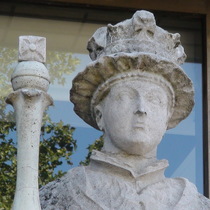 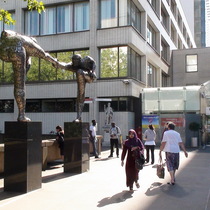 {On a plaque attached to the plinth:}
King Edward VI, refounder of St Thomas' Hospital, the central figure of a stone gateway erected in 1682 by Thomas Cartwright, Hospital Mason, to the plans of Nathaniel Hanwell.

This 1682 statue by Cartwright was commissioned by Clayton and was originally at the centre of a group of figures which formed a frontispiece the gateway on Borough High Street. By c. 1720 the gateway was found to be too narrow (often the way with gateways) and was widened. The frontispiece was moved to be on the east side of the block between the forecourt and an inner court, where it is shown in an engraving. The upper central figure is the king with four statues of ‘cripples’ flanking him. 1841 all 5 figures were salvaged when the block between the two courts was demolished. It seems they were then in storage until the new hospital was built in Lambeth in 1871.

In Southwark the king was erected in the centre of the colonnade facing the river and, apart from storage for safety during WW2, there it remained until 1955. We think this photo shows it there. It was then briefly relocated to a riverside loggia, and then, c.1970, all statues were put into storage while the hospital was rebuilt. 1976 the king, together with other statues (but not the 'cripples') was erected on the North Wing terrace, ready for the official opening, and there he remains.

The ‘cripples’ have moved around a bit and are now reported as being on the first floor of the North Wing.

The main entrance to the hospital is to the right of our photo. The modern sculpture is 'Cross the Divide' by Rick Kirby, 2000.

There is another statue of this king, inside this hospital.

This section lists the subjects commemorated on the memorial on this page:
Edward VI statue at St Thomas's - Cartwright

This section lists the subjects who helped to create/erect the memorial on this page:
Edward VI statue at St Thomas's - Cartwright