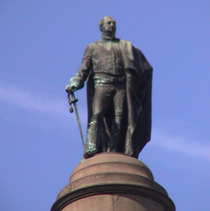 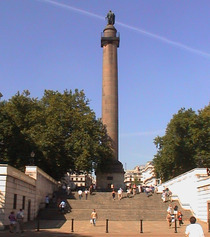 Bronze statue by Westmacott of "The Grand Old Duke of York" of nursery rhyme fame. Funds for the statue were raised by stopping one day's pay from every soldier in the late Duke's army.

Aberdeen granite column designed by Benjamin Wyatt is 123 feet high, with an interior stairway leading to the viewing platform which we believe is never open. 154 steps used to lead to a viewing platform which was closed after a rash of suicides in the 19th century. In Anthony Trollope's 1878 'Ayala's Angel' on page 307 one of Ayala's suitors declare "What I should like best would be to get Ayala on one side and Stubbs {another suitor} on the other, and then all three to go off the Duke of York's Column together."

Ian Visits has produced a splendid post on this one-time public observatory. Londonist reveals that this was the site of an early, 1848, lighting experiment.

This section lists the subjects commemorated on the memorial on this page:
Duke of York's column

This section lists the subjects who helped to create/erect the memorial on this page:
Duke of York's column