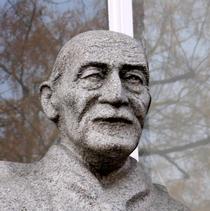 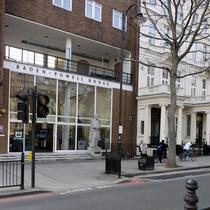 Unveiled by the Duke of Gloucester, President of the Scout Association as part of the official opening of the building. We thank Jamie Davis for finding this link to the British Pathe news film of the unveiling, where we also see a plaque inside the building being unveiled by the Queen.

Statues are seldom carved in granite (a very hard stone). Another one is William IV in Greenwich.

2021: Alan Freeland wrote to say "Sadly Baden Powell House has been sold - Baden Powell statue is no longer outside." So we've marked it as lost. We think it has probably been taken to Scouting HQ at Gilwell Park, near Chingford, along with the other Baden-Powell memorabilia.

This section lists the subjects commemorated on the memorial on this page:
Baden-Powell statue

This section lists the subjects who helped to create/erect the memorial on this page:
Baden-Powell statue

Cuneo{Brass plaque on the front of the plinth, to the right:}This sculpture w...