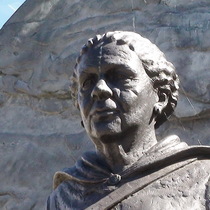 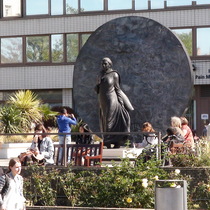 {Incised on the terrace in front of the statue:}
Mary Seacole, nurse of the Crimean War 1805 - 1881.
Wherever the need arises on whatever distant shore I ask no higher or greater privilege than to minister to it.

{On a slate plaque laid into the ground behind the statue:}
This bronze disk bears an impression of the ground taken from the site in Crimea where Jamaican nurse Mary Seacole ministered to British soldiers during the war of 1853 - 1856.

"I trust that England will not forget one who nursed her sick, who sought out her wounded to aid and succour them and who performed the last offices for some of her illustrious dead."
Sir William Howard Russell war correspondent, The Times 1857.

Considered the first statue in Britain to a named black woman and, we believe, 2021, 5 years later, still the only one.

This section lists the subjects commemorated on the memorial on this page:
Mary Seacole statue

Jamaican nurse, heroine of the Crimean War. That's the standard depiction of ...

This section lists the subjects who helped to create/erect the memorial on this page:
Mary Seacole statue