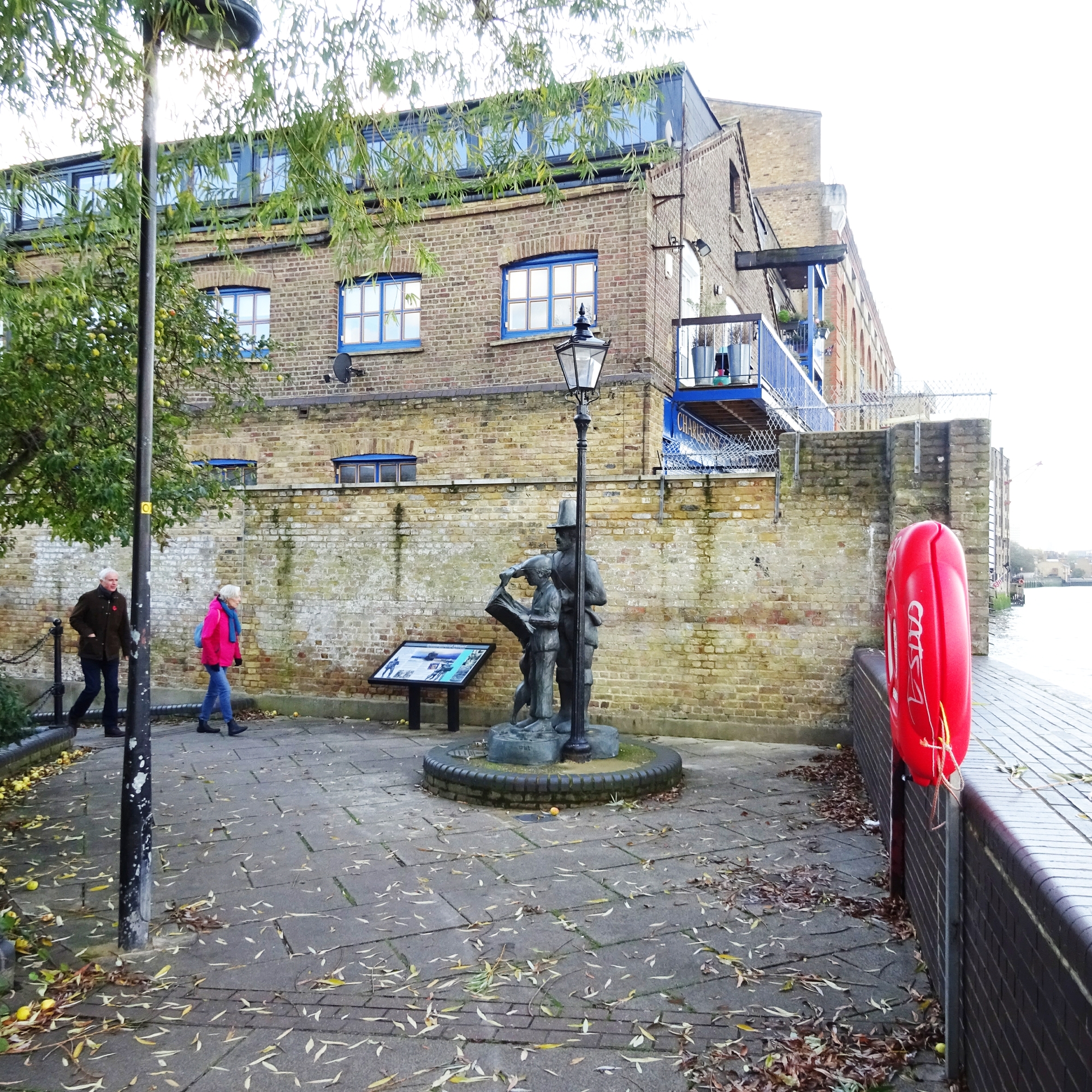 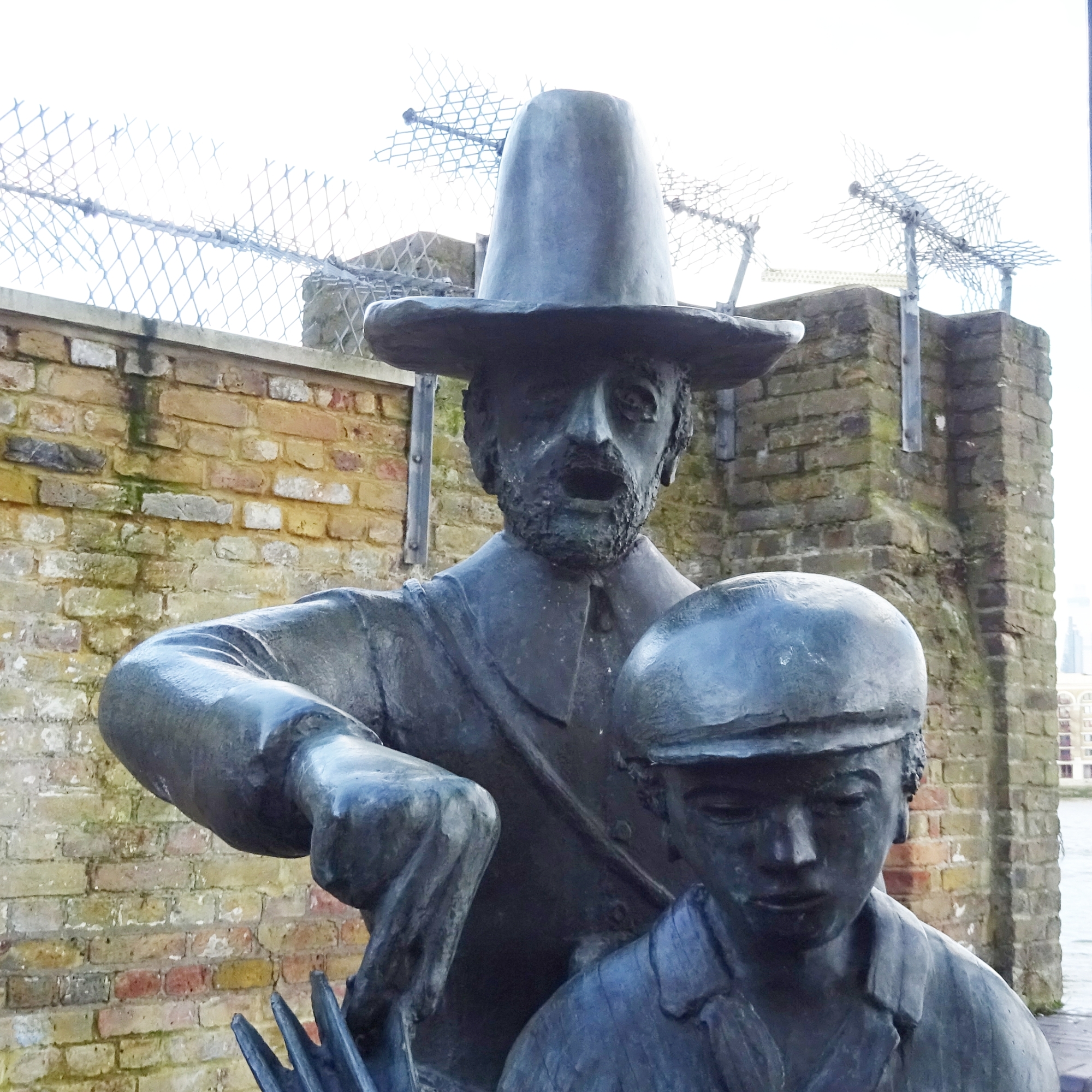 {Plaque at the base of the statue:}
A bronze sculpture by Peter McLean unveiled by Elsie Marks Vice Chair, Mayflower Tenants Association
Sunshine Weekly and the Pilgrims Pocket
Friday 29th November 1991.

Commissioned by
{Logo of the London Docklands Development Corporation:}

{On the boy's comic:}
Uncle Pete and Kevs
Sunbeam Weakl (presumably there should be a 'Y' at the end, but it's obscured by the boy's hand.)

The statue (next to a lamppost), comprises a (ghost of a) pilgrim father, looking over the shoulder of a small Bermondsey boy from about the 1920s (the 100th anniversary of the sailing of the Mayflower), and a dog (a Staffordshire bull terrier), standing on its hind legs.
The comic the boy is reading (made possible at night by the light of the lamppost) is called 'Uncle Pete and Kevs Sunbeam Weekly (actually spelt as Weakly wihout a 'Y'). This makes us wonder why the plaque calls the statue 'Sunshine' weekly, and suspect that it is a mistake.
The comic (which we believe refers to an actual comic called just 'Sunbeam') shows scenes of how America had developed since 1620, and the pilgrim is looking at it in apparent horror.
There is much other detail to be seen, including various tools and implements. In the pilgrim's pocket is a lobster claw, a fish, a crucifix, a totem pole and an A-Z dated 1620. Some sources say that the A-Z refers to New York rather than London, but we don't believe it has ever been published in America.
The pilgrim has a second pocket, and it is said that any visitor from the new world who places a small object in it will find a new and more rewarding path in life.
A nearby information board gives details about the sculptor, the Pilgrim Fathers and the native Americans who helped them.

'(+Kev)', refers to sculptor McLean's assistant, Kevin Bolger. the Latin 'Fecit' means 'made by'. The word (or initials) 'WHY' is unexplained, indeed, there's a lot about this sculpture that is unexplained, which might explain the WHY!

This site is expected to be very popular with American tourists commemorating the quadricentennial of the sailing of the Mayflower in 2020.

This section lists the subjects commemorated on the memorial on this page:
Sunbeam Weekly and the Pilgrim's Pocket 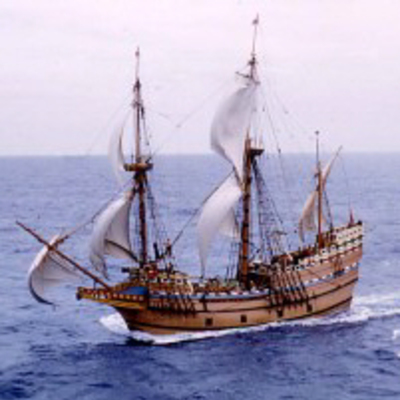 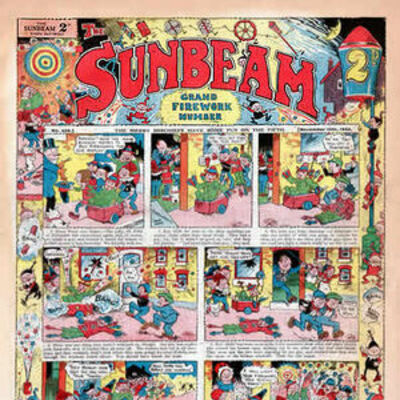 This section lists the subjects who helped to create/erect the memorial on this page:
Sunbeam Weekly and the Pilgrim's Pocket 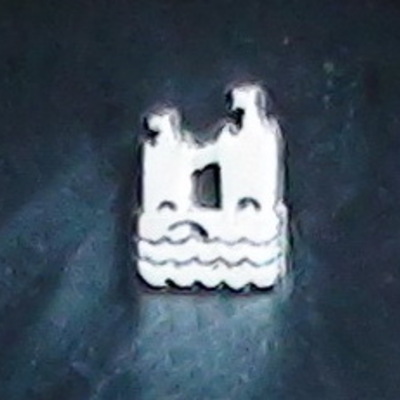 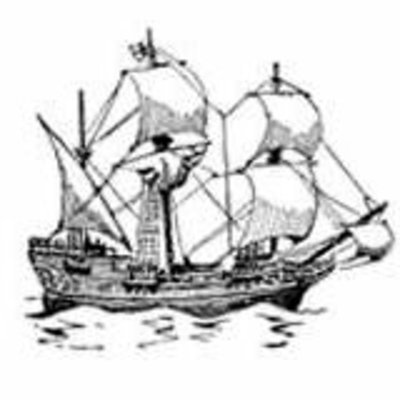 Tenants and residents association in Rotherhithe, based in Mayflower Hall, 1 ... 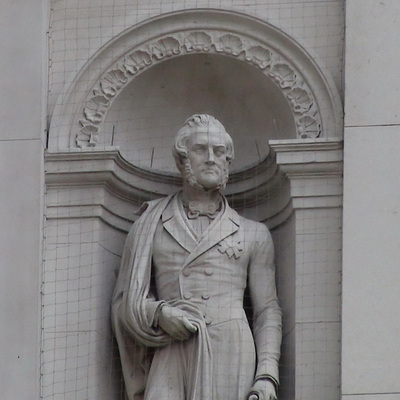 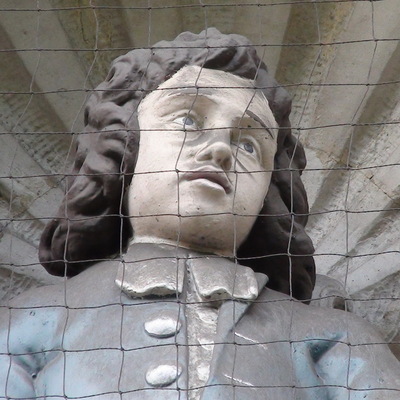 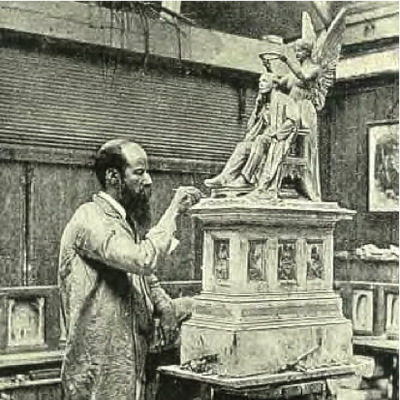 Donated by Henry Doulton and created in terracotta by Tinworth, who worked at Doulton’s nearby Lambeth factory where it was made. The bas... 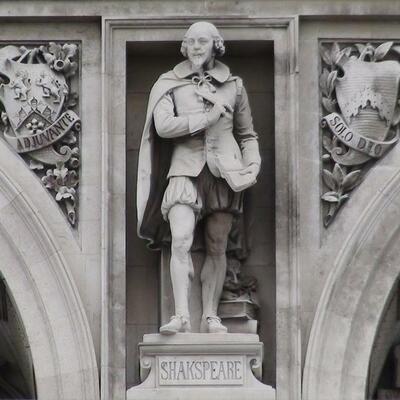 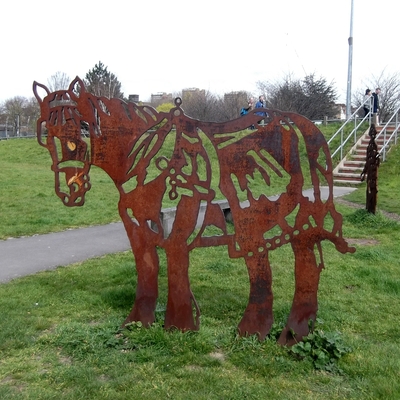 E3, Mile End Park, By the towpath near Haverfield Road